18.02.2015 – Today is project day, and our last day in Delhi. Rahul, a friend who spent lot of time together with us picked us up close to a metro station in Noida, the neighbor-city of Delhi. We had some time, so we could have tasty breakfast at his home before we continued to a school where a nice project took place. LEO Club Delhi Noida hosted a service project, which mainly was a drawing competition among the pupils of the school. This school was founded by Lions and is also being financed by them. They mainly run the school to enable underprivileged children to get an education. This children can go there for free and get education. So the aim is to get the kids from the streets into education. Lions pay for teachers, uniforms and everything which is needed to run the school. LEOs support the school with service projects like the one today.

Surprisingly we were treated as special guests of this project and were honored by the Lions-districts governor, which was a very big surprise and honor to us. I am still speechless when I think back to this moments.

The pupils were singing, dancing and celebrating us and the LEOs. After that the drawing competition started and they had around half an hour to draw a picture according to the topic “house / home”. For sure we also took part in the competition and painted a chalet in the mountains of Austria. Unfortunately we did not win the contest. After the 30 minutes were over, Karoline and me could select the four winners of the contest who got a bag stuffed with sweets as prize. But also for the rest of the pupils we had sweets and fruit-juice as little presents and thank you for their participation. As a present they gave us the four winning drawings – which was a real big surprise!

After that all LEOs and Lions members who took part in the project were invited to the district governors house for some nice Indian lunch. Jhummy-it was really really tasty. Homemade is always the winner.

In the evening Gaurav and Rahul showed us something special: Actually I have no idea what it is called and what’s inside there, I also did not try it, but it must be super crazy. It’s a cone stuffed with ice and some other things, which will be stuffed into ones mouth, so that one can’t chew it. One has to wait until ice is melting or swallow it.

To be honest, I preferred the street food we had afterwards more than this. What a last day in Delhi! 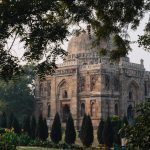