Okay. Let the journey begin again. New country, new culture, new LEOs. So I had to catch my plane from Linz to Frankfurt and after 4 hours of waiting further to Lisbon, Portugal. I was – actually before my trips I am always – very excited, because I do not know what will happen to me the next 10 days in Portugal. But let’s see. LEO community is great and only goo things will happen – I am sure.

During my layover in Frankfurt I used the time to focus on some things I had to do according to The LEO Book, such as answering e-mails and requests, organizing my workshops at LEF this year in Gelsenkirchen or update my blog. I found a pretty nice place at the terminal where I got free coffee and a wonderful view to all these big aircrafts. And the best: it was not crowded at all, although it was weekend.

Finally, after 4 hours of waiting we could board the next plane which took us to Lisbon. Unfortunately we hat a one hour delay because Lisbon airport was too crowded and we had to wait for another slot. Waiting another hour in the aircraft standing on the field is not very funny, but at least I had some great music with me. The airplane was a brand new model but with retro-design, which was designed for the upcoming 60th anniversary of Lufthansa.

The flight itself was great and very very calm and the approach to Lisbon amazing. There was clear sky and we were circling the city several times. What a great start! I reached Lisbon at around 23:30, so only 30 minutes left, until the sixt counter will close to give me the reserved car. Luckily the airport made a mistake and brought the luggage to another part of the airport, which caused another 1,5 hours of waiting for the luggage. Many passengers (including me) were unsure about their luggage and were crowding the Lost & Found counter at the airport. Meanwhile sixt counter was closed, but because I wasn’t the only customer for them, they waited for us, but charged us another 40€ extra fee for working late.

But okay, finally I got my nice car – a VW up – and could start finding the hotel. Great that they could not offer me a automatic-shift car (which I ordered), so I need to get used to manual shift again. But okay, I’m sure I’ll make it. I could reach my hotel at 2am in the morning. Portugal, I am here! 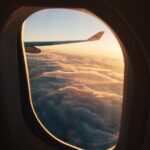 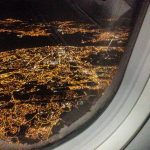