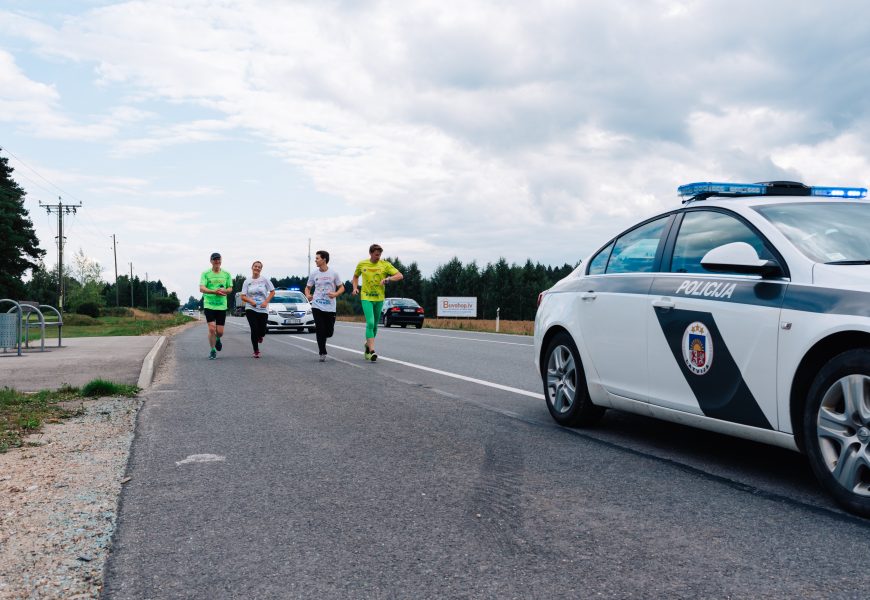 12/09/2015 – Because I arrived Riga at around midnight I picked up my car from Sixt the next day in the morning. I reserved the car for 8.30 but because of troubles in their system as well as some really stupid and annoying discussions with the staff there I finally got my car at around 10am. Their customer service is so excellent, that I had to pay almost double price for the rental because the lady who confirmed the booking did not read my email correctly. Not very nice  thing, but I’ll complain about all this in a letter to sixt after I’ll be back home.

The first impressions of Latvian roads were the same I had in Denmark: omg – such long straight roads, and maximum speed is 90 km/h – that’s something one has to get used to it.

The runners from the Freedom Charity Run 2015 started their last part of the run in Bauska, around 60km in the south of Riga at around 9am – but because I was late, I could not be there in time and had to search them. Fortunately I printed the exact running-route, unfortunately they were not running on that route. That small difference made me searching them for about 2 1/2 hours in the region where I thought they would be. Sure, the easiest thing would have been calling one of the LEOs and ask, but hey, that would have been too easy.

At around 14.00 I finally texted Signe where I can find them and it turned out, that I was almost 40km away from them. Great, but we finally met at a parking-lot in the center of a village. They made a refreshment break there. So everything was good 🙂

The Freedom Charity Run is an initiative from three Lions friends from Poland and Germany, who started to run for charity three years ago. They always run stages of 25km each, supported by friends, LEOs, Lions, volunteer runners or even kids (as you can see in a photo below). They are also selling virtual kilometers for 100€ / km if people want to donate for a charity reason.

We Run – We Serve

After 10 days of running they finally made it to Riga and as you can imagine, the runners were very very very happy. For the last two kilometers they were guided by other runners (e.g. one who ran from Ukraine to Riga), cyclists who arrived from Tallinn, volunteers as well as members of the LEO club. The final celebration was at the national library. where speeches and photo-shootings took place. Unfortunately I had to leave, but they also went to the memorial of freedom and brought flowers there. Also minister of defense took part in this celebration.

They also told, that last year they collected 16.000€, this year their goal is set higher and the money will be used to buy the right equipment for cancer therapy for children in Latvia and Ukraine.

More pictures from the run in this gallery on DELFI sports Website.

Around 18.00 four LEOs left Riga with me to drive to Valmiera, the town the LEO club was founded and is active. They set up a meeting with Lions, LEOs and activity partners to discuss their LEO club activities as well as give me the chance to talk about my project.

What a great and enjoyable evening. I got the chance to talk 1,5hrs about all my stories and my project and we were discussing different topics out of it.

The night ended in tinte (a club close to the hotel) at 4.30 (or so) in the morning – so yes, we had really great great fun and a superb time!

The first day in Latvia was really great. I could be part of a great activity in which 6 nations (Germany, Poland, Ukraine, Latvia, Lithuana and Estonia) were involved and could get to know such lovely members from Notth Latvia Leo Club. I am so looking forward to getting to know more about the LEOs, their activities and their country! Let’s see what is going to happen tomorrow.

So what about you? Have you ever heard about the Freedom Charity Run? What do you think about it? Let me know in the comments section below or on facebook!