2017: A collaboration between The Leo Book and the Leo Europa Forum 2017 (NL) in their most important year

November 2016 – 2017 is a very important year for both The Leo Book and the organizing committee  of the Leo Europa Forum (LEF) 2017 in the Netherlands. LEF is the biggest annual Leo event in Europe. For many years, these two initiatives have been working separately towards the Lions Clubs International(LCI)- and Leo anniversary of respectively 100 and 60 years. They have decided to partner up due to their similar goals and believes towards Leos on a global scale.

What is the Leo Book

The Leo Book, by Austrian Leo Othmar Fetz, visited 50 Leo clubs and initiatives all across the world to write about these clubs and to share their values and activities with the rest of the world. In 2017, during the LCI Centennial, these stories will be bundled into a book that will be published  and presented during the 100th Lions Clubs International Convention (LCIC) in Oak Brook, Chicago.

The Leo Europa Forum is the biggest annual Leo event in Europe where Leos from European & Mediterrean Leo Clubs (and some from other continents) experience a week full of interesting activities. There are many serious- and fun workshops, sightseeings, social activities (for charity), formal activities & meetings, and much more. Experiences from the past show that Leos learn a lot from each other during a week at LEF, become even more active within the organization and make (new) friends for life.

Presenting the book and sharing experiences

During the Leo Europa Forum in 2017 Othmar Fetz will kick off his book presentation tour, named The Leo Book Experience Tour. He will present the book and will also share some of the experiences he gathered at Leo events. The LEF 2017 organizing committee has decided to contribute to this initiative by sharing their knowledge and experience gathered while organizing the biggest annual Leo Event in Europe. LEF 2017 President Vince van de Weijer and Vice-President Pieter Haex will write blogs about the organization of LEF 2017 and the challenges they encounter while organizing. These blogs will be available for all followers of The Leo Book.

Othmar Fetz (facebook), founder of The Leo Book: “The Leo Europa Forum in The Netherlands is a very popular and important event for many Leos across Europe & The Mediterean for many reasons. I am proud of the ability to start working more closely together with this dedicated LEF team that has great ideas for the Leo community.”

Vince van de Weijer (facebook) & Pieter Haex (facebook): “The most important role that our forum has is to make Leos from all across Europe & The Mediterrean  learn from each other. On top of that we wish to facilitate an event where these Leos can become close friends. The Leo Book is a great initiative that has this similar mission, therefore we believe that The Leo Book deserves a stage during events such as LEF 2017. We are very excited about this cooperation with Othmar Fetz.”

Blogs by the Leo Europa Forum organizing committee will be written on a regular basis during the upcoming months towards the Kick Off of The Leo Book Experience Tour at LEF 2017. 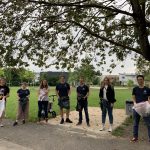